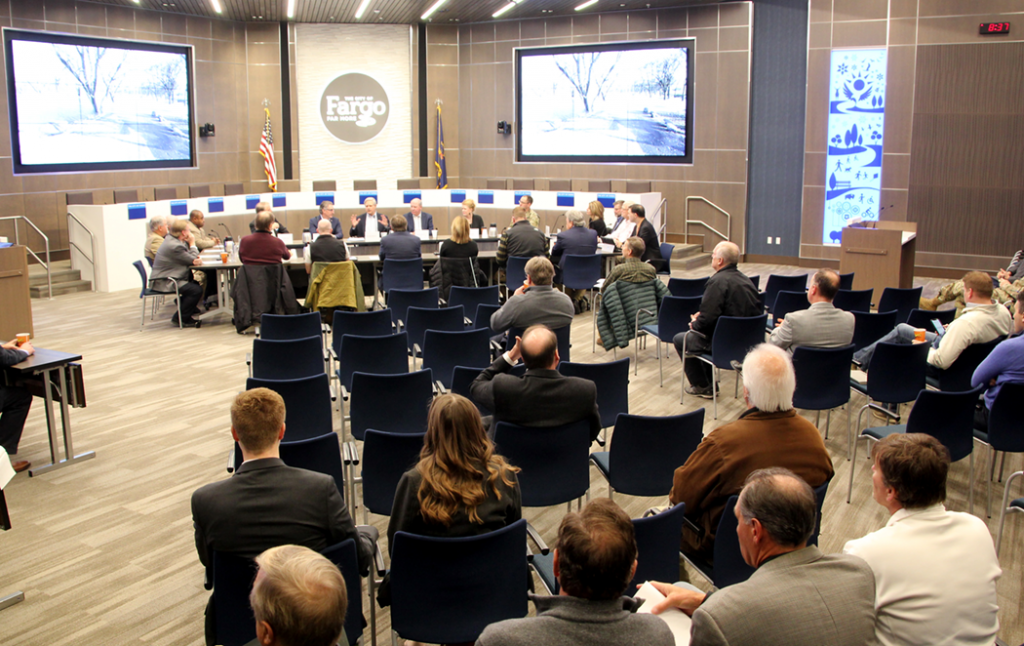 Visit with the Assistant Secretary of the Army (Civil Works)

In early November, Sen. John Hoeven, Gov. Doug Burgum and members of the Diversion Authority welcomed the Assistant Secretary of the Army for Civil Works (ASA) Mr. R.D. James to North Dakota. James was appointed by President Trump to oversee the U.S. Army Corps of Engineers.

“This is one of the most impressive projects that I have witnessed,” James said, explaining he has worked on many flood protection projects in his career. Before being appointed as the ASA, James served on the Mississippi River Commission for 37 years.

James met with the group in Fargo after touring the inlet construction and in-town floodwall projects along the Red River. The group also discussed the Project’s financial plan. James said he was impressed with the Project’s incorporation of a Public-Private Partnership (P3). He said working with a P3 firm will be a new tool for the government to get projects built.

“ASA James’ visit is an important opportunity to ensure key Army Corps leaders understand the impact of flooding in the Red River Valley and the progress we’ve made in building comprehensive flood protection for the region,” said Sen. Hoeven.

Hoeven said the meeting is part of the effort secure funding in the next two fiscal years so construction can move forward without delay.

“We’ve included increased support for the Army Corps’ construction account and a new account to support P3s in the Senate’s appropriations bill for FY2020, which, combined with our continued efforts with James and the administration, will help us achieve these goals,” he said.

“We in North Dakota understand flood fighting. We have won some but haven’t won all of them. We understand the risk is real. This project is of critical importance,” Gov. Burgum said. “It’s go-time.”

The group also discussed the impact of the wet fall on the agriculture sector of the state and highlighted how important the FM Area Diversion Project is for the region.

“This is the largest community in North Dakota. All told, about 23% of the state’s population will live within this protected area. On the flip side right now, 23% of the state’s population is at risk of losing our homes and businesses and livelihood,” Chair of the Diversion Authority Mary Scherling said. “We just can’t continue to be so vulnerable to the weather. This is something we need to do as responsible leaders.”