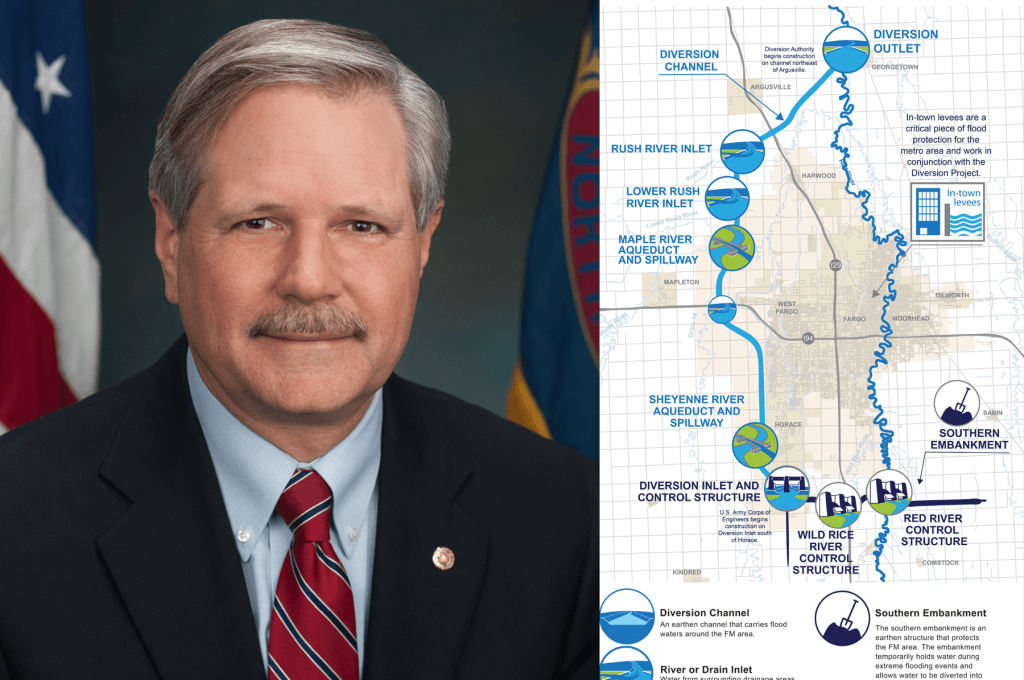 Construction on the F-M Area Diversion Project is ready to begin as early as 2016 under a private financing plan which could save a significant amount of money and cut the federal share of the project in half, as well as reduce the number of years needed to complete the work.

“That’s a remarkable opportunity that we don’t get very often,” said U.S. Sen. John Hoeven (R-ND) at a February meeting between fellow members of the North Dakota and Minnesota Congressional delegations; Diversion Authority members; and Major General Michael C. Wehr, Commander of the Mississippi Valley Division of the U.S. Army Corps of Engineers.

“We’ve got to have permanent flood protection here,” continued Sen. Hoeven. “We’re talking about a situation in which we can put this project together at a Federal cost that’s less than what the Federal government has already put into Minot just since we’ve been working on it. I think we’re up to 680 million dollars that we’ve put into flood recovery, federal dollars, into Minot.”

Under the public/private partnership (P3) plan being considered, the Diversion Authority would contract with a private company to build the channel portion of the F-M Area Diversion Project while the Corps constructs the Southern Embankment. (See a map illustrating the plan)

“We believe this approach would potentially save about $400 million in total project costs, reduce the Federal share, increase the Benefit-Cost ratio, and get this Project in place at an optimal delivery time,” said Terry Williams, U.S. Army Corps of Engineers Project Manager.

“Rather than $850 million, as has been touted before, we’re looking at something less with the P3 option,” Diversion Authority Chairman Darrell Vanyo said of the anticipated Federal share.

“The other issue is if the Corps does it using traditional methods, it will take 12 years to build.  When we do this, it will take six and a half,” said Tim Mahoney, Fargo Mayor.

Congress recently authorized the P3 model for flood control projects as part of the Water Resources Reform & Development Act (WRRDA). “We specifically set up the legislation in the appropriation bill that we passed,” said Sen. Hoeven. “It says consideration must be given by the Corps to projects that have local share and alternative means of financing. This project has both…and so we’re at that point now where we have to move forward.”

U.S. Rep. Kevin Cramer (R-ND) was also enthused about the P3 possibilities. “We added that extra ‘R’ to WRRDA,” he said. “There’s that extra reform piece, and I think it opened a door for some of the things we’re talking about. This could make some sense, in a resource-constrained country.”

“They’ve stepped up to all of the requirements, and they have a P3 project here that is a model for the country,” added Sen. Hoeven.

One Community is Taking Action

Several local entities have been working together for years in an effort to make the Diversion Project a reality, and that commitment was key to creating the P3 funding plan. “It just sort of reminds me how we’re one community,” said Del Rae Williams, Moorhead Mayor. “It’s one river, one community, and so whatever we need to do, it’s important that we do them together. What happens to Fargo really impacts Moorhead also.”

“You’ve all done your part. I don’t think anyone can argue that,” said Rep. Cramer. “To me, that’s what gives me the clearest conscience every time I go to Washington, and that’s the fact that you can’t argue with the investment that’s already been made by the people most affected. There are a lot of places that can’t go to Washington already having hundreds of millions of dollars and taxed themselves to the tune of another $700 million…almost nobody. To me, that’s what gives us the edge.”

The intense local concentration on developing the Diversion Project is driven by necessity, especially in the wake of the Flood of 2009. “We were so close to losing the battle, and we don’t ever want that to be the case here,” said Nancy Otto, Moorhead City Council member. “So from our perspective, and I hope from yours, you’ll see that we have 200,000 citizens here to protect. We have their homes, their businesses, their hospitals, their schools…we have infrastructure. This is something that our cities have fought long and hard through many, many different floods. And I just believe that we deserve a measure of protection for our citizens so that they can have some ease in their own homes and their own businesses.”

“The tenacity that exists within this community is self-evident,” said Maj. Gen. Wehr. “We all share the same goal of reducing the risk to flooding. How we get it through at the Federal level is constantly changing and I think it’s for the better. The dialogue that we’ve had over the last year based on this initiative is unprecedented.”

Impacts are being Mitigated

U.S. Rep. Colin Peterson (D-MN) let those assembled know he supports permanent flood protection for Fargo-Moorhead. “We understand that Fargo needs permanent protection, and we’re going do what we can to make that happen,” said Rep. Peterson. At the same time, he expressed interest in measures being studied to mitigate the impacts to communities upstream of Fargo-Moorhead. “We still have some challenges which you’ll hear about and probably already have heard about…but we’ll work through them, hopefully.”

North Dakota State University’s Department of Agribusiness and Applied Economics is helping to evaluate the impacts on farm land due to operation of the Diversion Project. Preliminary information has found that over the last 73 years, there were nine flood events, each of which occurred between mid-March and mid-April, which would have been large enough to require the Project to operate.

“We will have a presentation by NDSU in a month or so as to what they have accomplished for their engagement,” said Vanyo. “Following that, there will be further engagement.”

“We do have to address these issues, and I know that both Fargo and Moorhead and Cass and Clay Counties are working hard on that, and they’re not going to stop,” said Sen. Hoeven.

Collaboration and resolve have been the keys to the Diversion Project’s progress. “The number one concern every year, when we do a survey, is still flood control,” said Mahoney. “We had wanted to get shovels in by ’13. That didn’t happen. But now, we’re looking at more, ‘Can we do it in ’16?’  So let’s think about that and figure out a way of doing it.”

“It’s too much gone too far to stop at this point,” said Vanyo. “So we need to continue and forge ahead, and once and for all, have flood protection that is going to meet our needs for years to come.”

Public Meetings to be Held on Proposed Liability Assessment District

Private Financing Plan to be Studied by Ernst & Young