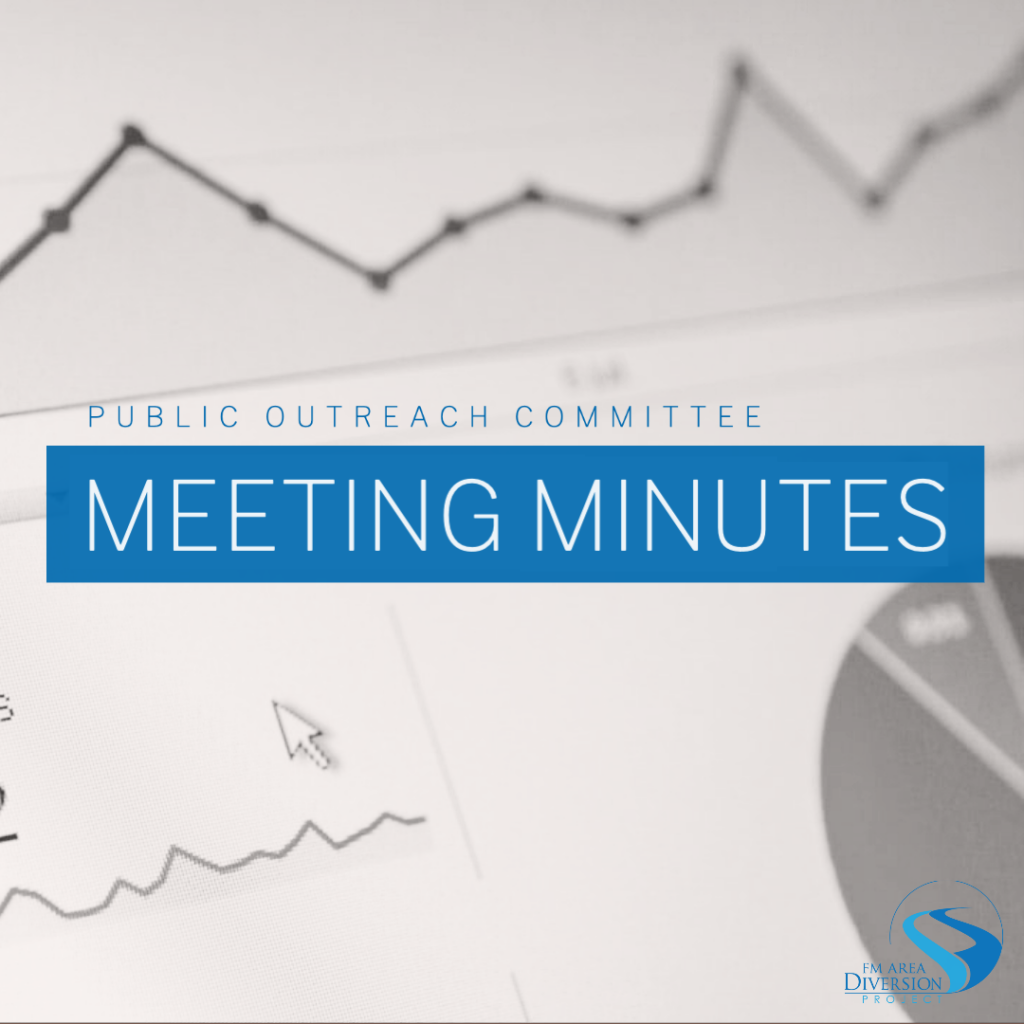 The meeting was called to order by Mr. Rodger Olson at 1:37 p.m. Mr. Mike Thorstad motioned to approve the meeting minutes from February. Mr. Kevin Campbell seconded the motion. The minutes were approved unanimously.

LEGISLATIVE TRACKING
Rocky Schneider noted the project has been discussed by the North Dakota Legislature’s House Appropriations Committee. Questions included inquiries about permitting, permit conditions from the Minnesota Department of Natural Resources (DNR), federal funding and work during the next biennium. He noted funding for the project is included in SB 2020 and noted three other bills that dealt with funding and lands and the Legislature would conclude in the end of April. Rodger Olson asked about the Ottertail project. Gregg Theilman told the board his understanding was it was a channel restoration project. Kevin Campbell said it is important to understand what is happening at the Legislature.

LAND OUTREACH ACTIVITIES
Mr. Schneider said about 500 letters were sent to landowners and calls from some have been fielded by lands staff. Many requests for information have been landowners on the fringe of areas impacted by the Project. He noted that there has also been work preparing to submit a Conditional Letter of Map Revision to the Federal Emergency Management Agency.

OUTREACH TO MINNESOTA
Project representatives attended Commission meetings in Becker and Ottertail Counties in Minnesota. Presentations were made about the project and many questions were asked about the project status. Mr. Schneider said returning to those commissions will be important in the future as the project progresses. Kevin Campbell noted the Commissions were clearly interested in the Project and asked excellent questions. He asked the Committee to think about additional boards and commissions that may like information or status update presentations. Mr. Campbell noted outreach to areas north of the Project should be considered. Mary Scherling told the Committee that the Red River Basin receives questions about the Project from people all the way up to Grand Forks concerned about potential impacts.

FEDERAL FUNDING UPDATE
Mr. Schneider noted that the federal government recently announced there would be an updated Project Partnership Agreement that increased the federal contribution to $750 Million. Mr. Joel Paulsen asked about the funding and allocation process. Mr. Schneider said that in his experience, projects that have environmental reviews and permits complete are set up for approvals for allocation process. There was discussion about differences between appropriations processes in North Dakota and Minnesota. Kevin Campbell noted that Minnesota Gov. Walz was in Moorhead recently and noted he had been in dialogue with North Dakota Gov. Burgum.

ANALYTICS AND THREE QUESTIONS VIDEO
The Committee watched a 3 Questions video with Jon Riewer, President and CEO of Eventide. They also reviewed the website and social media analytics report for the month of February.

OTHER BUSINESS
There was discussion about the flooding forecast and previous spring events. There was discussion about the impacts flooding was having in states like Nebraska. Mr. Schneider noted the Diversion Board would have booths at the City of Fargo flood information meetings the following week. Mr. Paulsen noted the neighborhood meetings in Moorhead the following week as well.

Mr. John Strand Strand moved to adjourn the meeting. Mr. Jake Gust seconded the motion. The motion was unanimously approved and the meeting Adjourned at 2:31 p.m..

Rick Steen moved to adjourn the meeting. Kevin Campbell seconded the motion. The motion passed with unamious approval and the meeting was adjourned at 2:30 p.m..