From the Minnesota Department of Natural Resources

The Draft SEIS, and additional details about the proposed project and the DNR’s review process are available at mndnr.gov/fmproject. The DNR invites comments on the Draft SEIS until 4:30 p.m. Sept. 27.  An open house and public meeting are scheduled for Sept. 13 in Moorhead.

DNR Commissioner Tom Landwehr said changes to the original proposal require additional analysis. He said the DNR’s Draft SEIS is entirely separate from the agency’s ultimate decision about whether to approve the permit application. The SEIS will help ensure that the potential impacts of the project, as revised, are thoroughly assessed and disclosed, he said.

“I want to emphasize that Minnesota continues to support enhanced flood risk management for the developed portion of the Fargo-Moorhead area that can meet Minnesota state standards,” Landwehr said.

The U.S. Army Corps of Engineers is preparing a federal supplemental environmental assessment for the proposed project, which is similar to the state SEIS in scope and purpose.

A copy of the Draft SEIS is available for public review at:

Written comments on the Draft SEIS must be received by 4:30 p.m. Thursday, Sept. 27.

Comments may be emailed to: environmentalrev.dnr@state.mn.us with “Fargo-Moorhead SEIS” in the subject line. If using the email address, include name and mailing address to be added to the mailing list.

The DNR’s open house and public meeting on the DSEIS will begin at 5:30 p.m. Sept. 13 at the Courtyard Marriott (1080 28th Ave S, Moorhead, MN 56560) in Moorhead. The meeting will begin with an open house, where attendees will have an opportunity to engage DNR staff on the content of the DSEIS. A brief, formal presentation will follow the open house, and the DNR will take public verbal or written comments on the DSEIS.

The previously-proposed Fargo-Moorhead Flood Risk Management Project was denied in October 2016. The proposer has developed a new alternative, called Plan B, which was not evaluated in the Final EIS and therefore requires by state law the preparation of a Supplemental Environmental Impact Statement (SEIS).

The Project is located in four counties: Cass and Richland Counties, North Dakota, and Clay and Wilkin Counties, Minnesota. The DSEIS evaluates and discloses potential environmental and socioeconomic impacts and proposed mitigations for Plan B and the No Action Alternative (with Emergency Measures). Examples of information on topics contained in the EIS includes, among others, aquatic resources, Project hydrology, wetlands, cultural resources, agricultural impacts, land use, and Federal Emergency Management Agency (FEMA) regulations associated with the Project. The EIS also includes a cumulative potential effects analysis for impacts of the Project plus other area projects, a comparison of alternatives, and additional recommended mitigation. Intended as a full-disclosure document, the EIS does not recommend a final decision or alternative, but does provide valuable information to decision-makers for permitting and land use. Decisions about whether to proceed with the Project can only be made following completion of an EIS and, for the State of Minnesota, will involve a decision for a dam safety and work in public waters permit.

A public review and comment period will begin on August 28, 2018.

The DNR invites and encourages public comments on the DSEIS during the public review period that ends on September 27, 2018 at 4:30 p.m. A public informational meeting will be held on September 13, at Courtyard Marriott, 1080 28th Avenue S., Moorhead, MN. The meeting will begin at 5:30 p.m. with an open house where attendees can learn more about the project and ask detailed questions of technical staff. Formal presentations will begin at 7 p.m. followed by a public input session. You will have the opportunity to have your oral comments recorded individually at the public meeting. You may also register to speak at the podium in front of the assembled audience for a pre-determined length of time and have your comment recorded.

Public comments will be accepted on the DSEIS through September 27, 2018 at 4:30 PM. Comments submitted on the DSEIS will become part of the official record and as such, may be made available to the public. Comments and submittals will not be edited to remove any identifying or contact information; therefore, the DNR cautions against using any information that should not be publicly disclosed. Both mailed and emailed submittals will be accepted.

Email submittals should be directed to environmentalrev.dnr@state.mn.us and should include “Fargo-Moorhead” in the subject line. Please include your first and last name with an email submission. 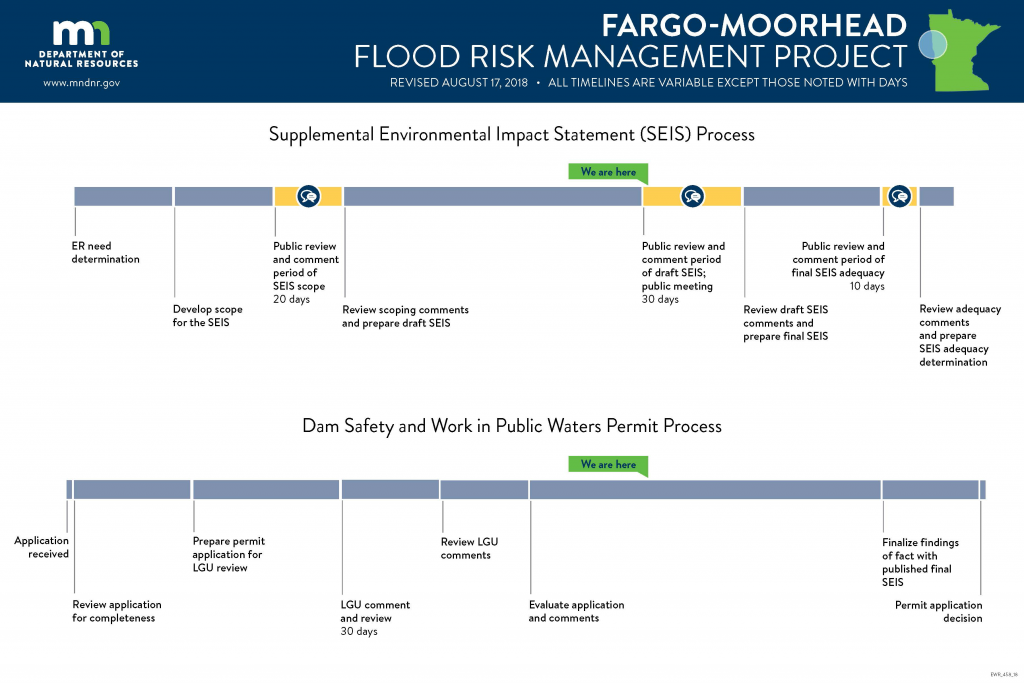