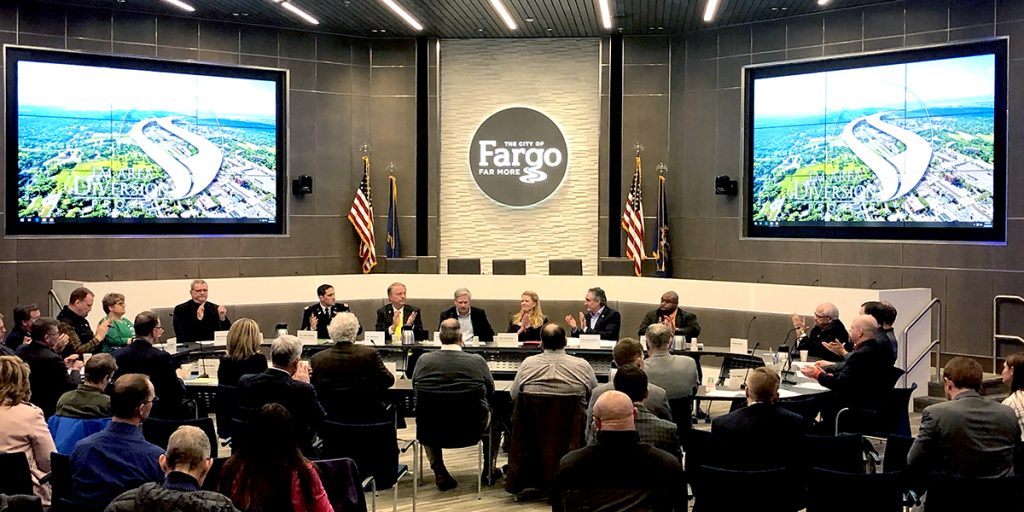 Editors Note: The following release is from the Office of Sen. John Hoeven

FARGO, N.D. – Senator John Hoeven, a member of the Senate Energy and Water Development Appropriations Committee, today joined Col. Samuel Calkins, Commander of the St. Paul District for the Army Corps of Engineers, as well as state and local leaders at the signing of the new Project Partnership Agreement (PPA) for comprehensive flood protection in the Red River Valley. Hoeven detailed his work, including:

The inclusion of a new $150 million account in the President’s budget for public-private partnership (P3) projects, including in the Red River Valley.

This is a result of legislation Hoeven passed in the FY 2019 Energy and Water Appropriations Bill that directed the inclusion of P3s in the President’s budget. P3s represent a new type of financing model for the Army Corps of Engineers and have not been included in previous budget requests.

“Between the renegotiated Project Partnership Agreement with its $750 million federal funding level and the new P3 account in the President’s budget request, we’ve made a lot of progress in advancing comprehensive flood protection in the Red River Valley,” Hoeven said. “The increased funding commitment helps provide certainty for state legislators and the local project sponsors, while the $150 million in the budget for P3s helps ensure we can meet that commitment as the project is now eligible for funding through both the budget and the Corps work plan. Ultimately, these achievements support funding the project including the implementation of Plan B. We’ve passed many pieces of legislation to bring us to this point, and today’s signing ceremony is an important milestone after these years of effort.”

Hoeven also detailed legislation he passed to secure comprehensive, permanent flood protection for the Red River Valley and to bring the project to this point.