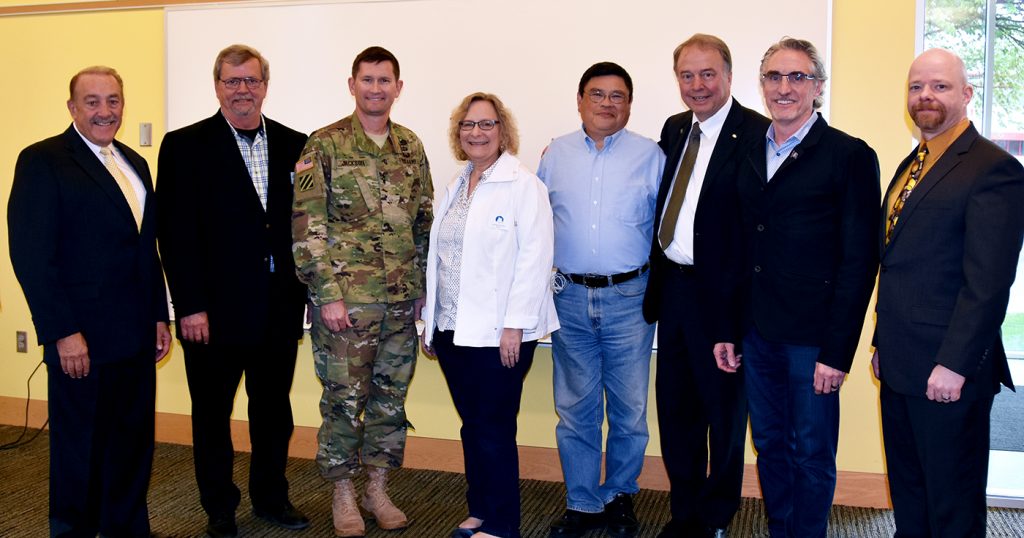 Major General Ed Jackson of the U.S. Army Corps of Engineers visited Fargo and Moorhead in late May to learn more about the FM Area Diversion Project.

Jackson is the Deputy Commanding General for Civil and Emergency Operations for the Corps. He, along with Mr. Let Mon Lee, the Deputy Assistant Secretary for Policy and Legislation, met with local officials and attended a Flood Diversion Board of Authority Meeting.
“We are continuing to push this project to try to meet the federal funding commitment that you are familiar with,” Jackson said. “This is a unique project. Never have we had a P3 project before. Never have we had a community that has stepped up like you have.”
Col. Sam Calkins of the St. Paul Army Corps office gave officials gave a brief update about the Corps work in recent months. He noted that the Corps’ contractor has been moving and piling dirt south of Horace at the site of the future Diversion Channel Inlet and Control Structure. The Structure is part of the southern embankment
“This is a split delivery project…with the federal government being responsible for the southern embankment and the control structures associated with that, and the Diversion Authority and the P3 contractor responsible for the Diversion itself along with the associated infrastructure; but the entire project is, I think pretty clearly, a federal project,” Col. Sam Calkins of the Corps, said.
Members of the Diversion Board of Authority asked questions about federal funding, road closure notification and how to strengthen the partnership between local and federal entities.
Prior to the Board meeting, Army Corps officials had a chance to learn more about the Public Private Partnership, or P3, process being used to construct the diversion channel.
Gov. Doug Burgum attended the P3 portion of the visit and discussed the project with local and Corps officials.
As the project moves forward and is constructed, Major Gen. Jackson said the Corps will continue to highlight the effort and discuss the project in Washington D.C., as it’s the first time a Corps project has incorporated P3 components.
“The Army Corps of Engineers is committed to this project and will continue to work to get this thing delivered in partnership with each of you,” Jackson said.