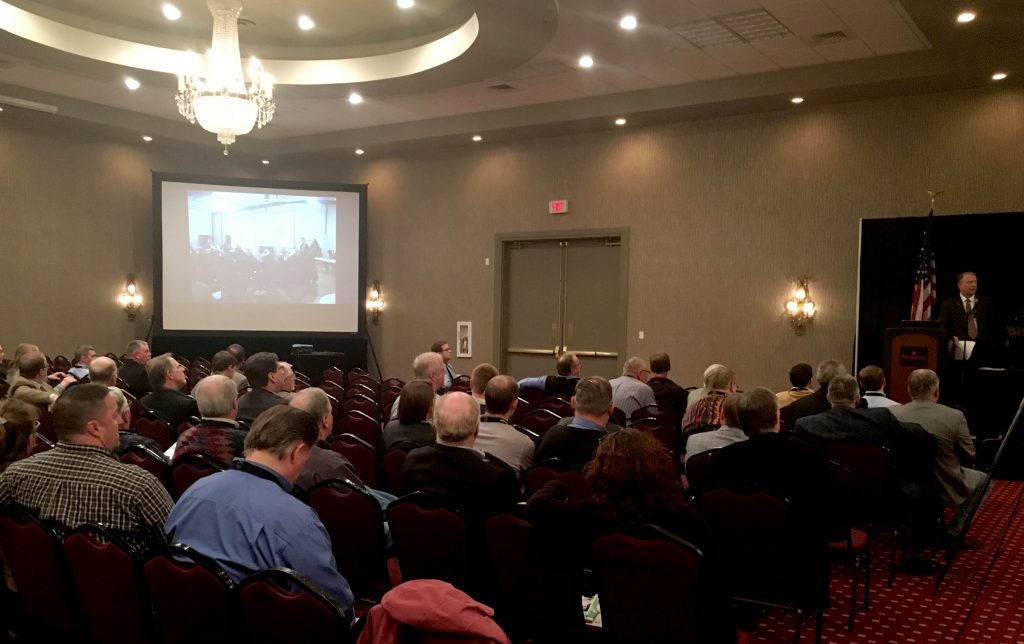 Members of the FM Diversion Authority, U.S. Army of Corps of Engineers (Corps), and other leaders from around the region attended the Red River Basin Commission Conference in Fargo. The conference brought residents from the Red River Basin together to discuss land and water management issues. The event focuses on basin-wide education that results in improved management of natural resources.

Col. Samuel Calkins, the District Commander of the St. Paul District of the Corps, and City of Fargo engineer April Walker presented on Wednesday, Jan. 18, about the numerous alternatives considered during the development of the FM Area Diversion Project.

“In 2008, we had five alternatives and we had close to 60 public meetings about that plan at that time. That project was designed around what we knew. What we knew at the time was our impending flood plain changes would take us to a river gauge of approximately 39.5 feet. That is was what we expected to be the largest flood we would have to deal with,” Walker said.

City engineers were in the process of presenting the plan to the public when the city was hit with a record-setting flood in 2009 that changed everything. The Red River crested at 40.82 feet, well above the 39.5 feet the City had been planning for. The city vowed to not make the same mistake twice, and began to plan for a project that would sufficiently protect the entire city.

“We came to the conclusion that when you are trying to pick the right project, we really need to be looking at more than 100-year protection for the size of community that we are,” she said. “The Corps helped us wade through a number of alternatives.”

The Corps worked with local leaders to evaluate alternatives between 2008 and 2014, when the Diversion Project received authorization from Congress. The Project was then given the go ahead to begin construction last year by federal government and the Corps plans to break ground this spring.

“This past year we have had a lot of milestones on the Project from the federal perspective,” Col. Calkins said. “We were approved as one of six new starts for the country. This Project is necessary. The Project in its current form is the one we are committed too, and we are moving ahead with the Project.”

Following presentations from Fargo and the Corps, the Minnesota Department of Natural Resources Commissioner Tom Landwehr presented its viewpoints about the Project. In mid-2016, the DNR released its final Environmental Impact Study (EIS) which did not result in the identification of any reasonable alternatives to the Project. A few months after the release of the EIS, the DNR denied a permit for the Project and recently joined the court proceedings brought by project opponents.

“We do feel strongly that we have arrived at the appropriate project for this community. We are protecting 230,00 lives, 150,000 jobs, $19 billion in property value, $5.5 billion in wages and about $3.5 billion in annual sales,” Walker said during the conference. “You can see that we looked at many alternatives. It was not our intention to create a grand project. We allowed the process of problem solving to help us to evolve into the right project and the project that provides protection to our community.”

To watch the presentations and the entire discussion, visit www.fmdiversion.gov.

A video of all presentations and ensuing discussion can be found here. Walker’s presentation is available here.

The FM Area Diversion Project also provided information to conference attendees at a booth in the main hall throughout the event. Educational materials used at the booth can be found here.