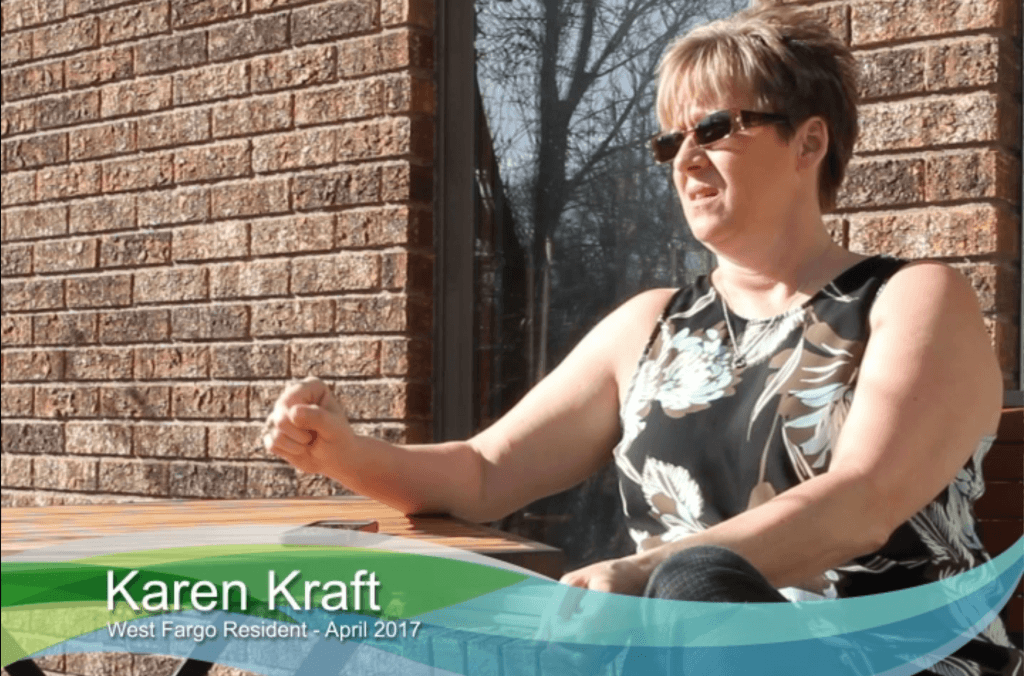 Although it’s been twenty years since the spring of 1997, West Fargo homeowner Karen Kraft carries memories from those months with her as she walks across her yard.

“Over there, the kids were sledding down a snow pile while we were over here sandbagging the house,” she says, laughing. She casually shows the propane tank that flipped over during the flood leaving the family without heat. Now it’s tied to the ground. “There were so many memories. A lot of funny things happened, and you just had to laugh about some things.”

But there were times that were more stressful than amusing. The moment Kraft and her husband woke up in the middle of the night to the sound of running water and realized it was water from the Sheyenne River coming over the road toward their home.

“It was a ‘woosh.’ It sounded like a waterfall,” she said. Days later, Kraft got a call from her husband to tell her the basement was taking on water and they needed more pumps to save their home.

“At that moment, I knew it was possible that we could lose our home,” she said.

The power of the 1997 flood tested many in the Red River Valley. Families fought to save homes, businesses and lives. Record snow fall combined with warm temperatures caused the Red River and others to rise rapidly. The Wild Rice rose more than 12 feet in 24 hours. When things looked bad, they got even worse. A massive blizzard swept through the region, dumping 10 to 24 inches of snow throughout North Dakota, compounding the problem. Many families had no power and no way of navigating closed road systems, impeded by water and ice.

The situation was frightening and dangerous. Neighbors were rescued in the buckets of tractors. 90,000 cattle died during the blizzard and ice storm. Schools closed. Thousands of residents – including children – threw sandbags for hours to save cities, towns and homes. Sometimes it worked, sometimes it didn’t. Around 10,000 residents of Grand Forks evacuated when levees began to falter.

But 20 years gives a person perspective.

Kraft thinks the flood of 1997 resulted in the community taking the threat of flooding more seriously. The dangers of 1997 helped ensure people were prepared to fight in 2009 and 2011.

The flood also brought her family and small community together. Friends and family worked for days to sandbag her parents’ home and her home. The small ring levees had to be monitored constantly. Friends spent time together battling the elements, but accomplishing a huge task together.

It was stressful. Boats or canoes were needed just to get home. Eight constantly-running pumps battled water in the basement. Sandbags frozen in place during an ice storm sprang leaks, requiring more sandbags. Her two dogs had to move to a kennel for a month and her children stayed in West Fargo so they could continue going to school.

It was expensive. Flood insurance helped pay for things like sandbags, gravel and waders but didn’t cover any part of a room in the basement that had to be gutted after the water was gone.

“We used to have a fence right there,” she says pointing toward the side of the pretty green and brick home with white trim. “The sandbags went right through the fence gate but we took the fence out to build up that area.” After the cleanup, Kraft and her husband personally invested in flood protection for their home. They built soil up around the base of the home so to help their effort if they ever have to sandbag again.

It seems easier now to remember the unusual, or fun times that the flood of 1997 created instead of the stress and fatigue. Kraft’s children thought it was fun, for a bit, to ride in boats around the neighborhood. But as the days turned into weeks, the novelty wore off.

Eventually, the water went away and the Kraft family was left with a muddy mess.

“We had to replace all of the carpet because you get to a point when you have to choose between saving the house…or saving the carpet,” she explained. Sandbags has to be cleaned up and debris dealt with.

And although the flood of 1997 lives in her memories, it’s not the only one that she has experienced.

The water overflowing from the banks of the Sheyenne River came to her door in 1997, 2009 and 2011, Kraft explains. Each time her family fought back with sandbags and determination.

Those days may be close to over for Kraft and her neighbors. Their homes are some of the thousands that will be protected by the building of the FM Area Diversion Project. The Project will help the Sheyenne Diversion operate more efficiently by taking overflow water into the Diversion Channel instead of sending it into Kraft’s front lawn.

While she is empathetic for those impacted by the project, Kraft says she also is looking forward to the day when her community is safe from huge floods.

“I know what it’s like to live on the outside of the protection of a diversion,” she said. “It’s hard.”

Kraft said watching her childhood home being demolished because it was purchased as a flood buyout was hard, but she understands why it happened. Even so, it’s difficult to put a price tag on places filled with memories.

But having flood protection is important to Kraft. That much is obvious walking around her well-manicured lawn. The ground slowly slopes up toward the house, an improvement they made after the flood of 1997. The chain-link fence that impeded sandbagging is gone. The property is lined with trees and the front porch is surrounded by a retaining wall that can function as the base for sandbags if necessary.

While these measures provide peace of mind, and Kraft knows there are probably more floods on the way. Having a project to protect her home from the rising waters  will make desperate and stressful spring months a thing of the past.