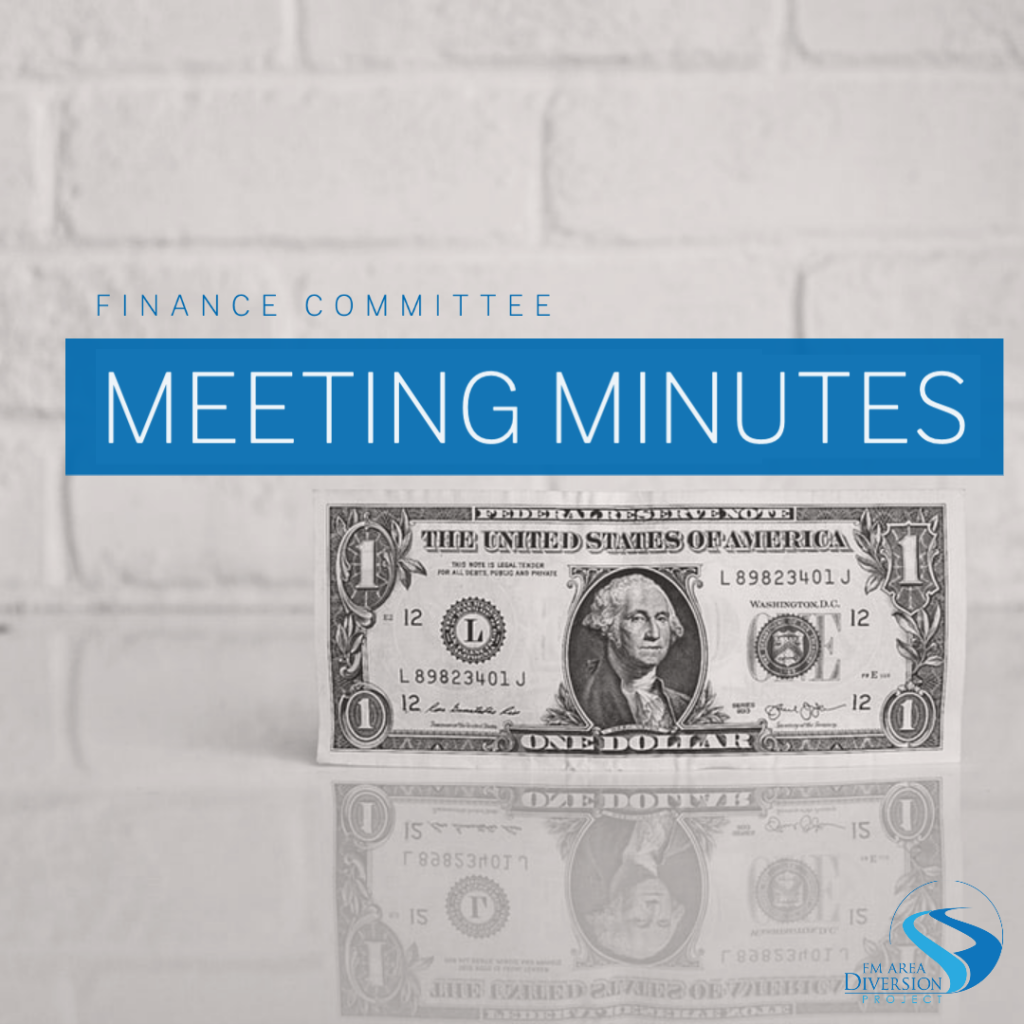 3. APPROVAL OF BILLS
Mr. Costin said bills for the month total over $10.5 million. Four sizeable land purchases were included in the Cass County Joint Water Resource District (CCJWRD) monthly billing, in addition to reimbursement requests from the City of Fargo for in-town flood protection work. MOTION, passed
Mr. Montplaisir moved and Mr. Redlinger seconded to approve the bills in the amount of $10,523,705.68, and to forward them to the Metro Flood Diversion Authority. Motion carried.

4. FINANCIAL UPDATE
Mr. Costin reviewed the financial statement for February. About $3.2 million has been expended from the FY 2019 budget, and the total disbursed for the project to date is $456,911,486. The net position is to $90.8 million. MOTION, passed
Mr. Peterson moved and Mr. Jacobson seconded to receive and file the Financial Statement for February as presented. Motion carried.

8. PROPERTY APPRAISAL SERVICES CONTRACTS REPORT
Ms. Daily said appraisal service firms have been contracted through Cass County Joint Water Resource District. The first five appraisal packages have been divided between three firms for locations throughout the channel.
9. REVISED 2019 PROGRAM BUDGET
Mr. Redlinger said a revised 2019 program budget is expected to be presented in April, once the outcome of upcoming litigation activities are known.

11. OTHER BUSINESS
Amended Cost Share Reimbursement Agreement
Mr. Redlinger said he received an amendment to the cost share reimbursement
agreement between the State Water Commission and the Diversion Authority, for an additional cost share of up to $66,500,000 to reimburse 50% of actual eligible project costs. The amendment will allow expenditures to be coded against this latest installment, which was appropriated during the 2017 legislative session. The signed amendment ensures the funds will be appropriated as legislative intent is not binding to future legislative bodies.
Attorney John Shockley said he will prepare a joint resolution for Fargo, Cass County, and Cass County Joint Water Resource District to designate the Diversion Authority as the approving authority, negating the current process, which requires all three entities to approve each reimbursement request.
MOTION, passed

Mr. Redlinger moved and Mr. Peterson seconded to approve Amendment I to the Agreement for Cost-Share Reimbursement with the North Dakota State Water Commission, and to forward the recommendation to the Metro Flood Diversion Authority. On roll call vote, the motion carried unanimously.
12. NEXT MEETING
The next meeting is scheduled for April 24th at 4:00 PM.

13. ADJOURNMENT
MOTION, passed On motion by Mr. Peterson, seconded by Mr. Gehrig and all in
favor, the meeting was adjourned at 4:30 PM.