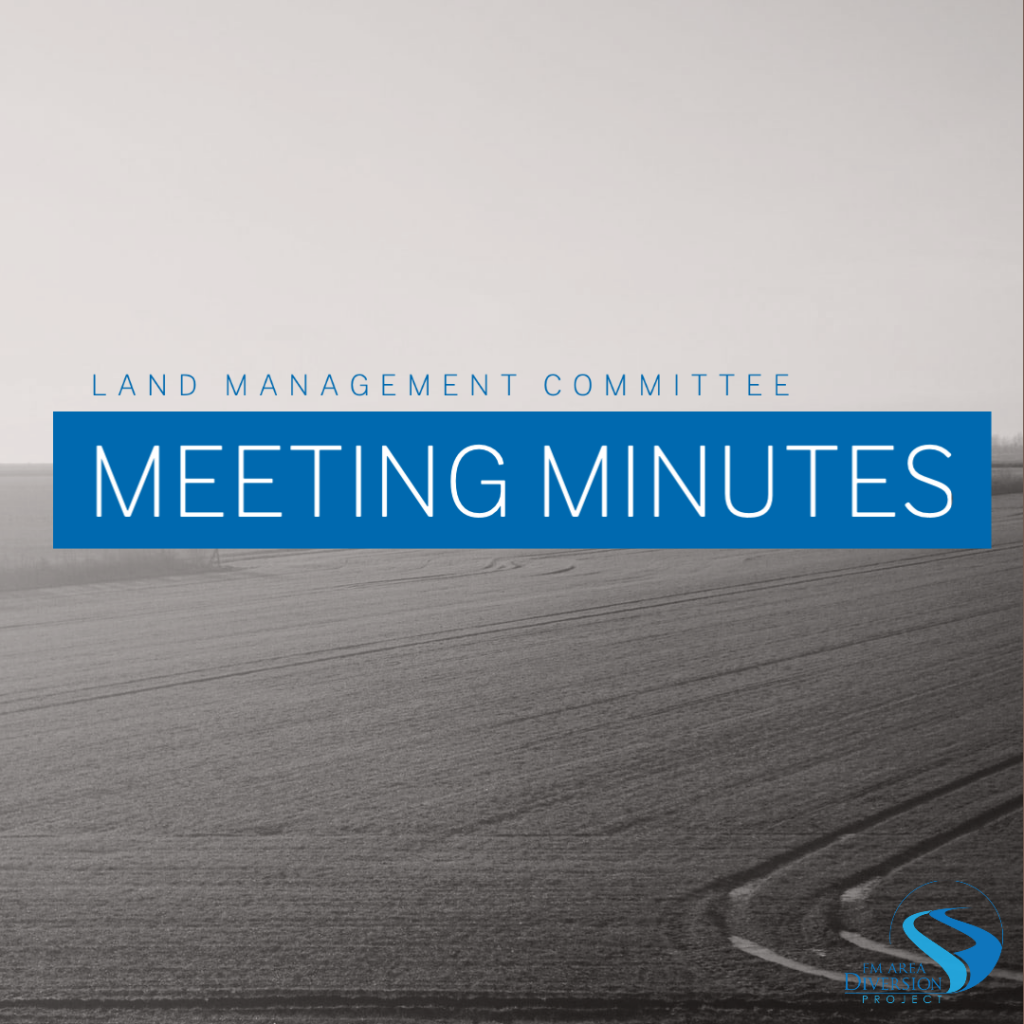 Mrs. Scherling called the meeting to order at 8 am. Roll call was taken and a quorum was present.

No revisions were made to the agenda.

The Cass County Joint Water Resource District (CCJWRD) is recommending to the Land Management Committee two land exchange agreements with two individual property owners, and with Land Management Committee approval, the CCJWRD is asking for final approval from DA Board. The two land exchange recommendations are the result of ongoing negotiations with the property owners, even though CCJWRD has been authorized to proceed with eminent domain actions to acquire the necessary property rights. If these land exchange agreements are approved, the eminent domain actions could be suspended.

The Fosse property possesses 63 acres that are needed for the channel. They currently operate their cattle business on these 63 acres. The CCJWRD Board approved the land exchange at the December 17 meeting. The exchange would allow the Fosse’s to relocate their cattle operation to adjacent land and would also include a cash disbursement.

Mr. Olson indicated that the CCJWRD Board feels that the land exchange is a fair to keep the Fosse’s in their cattle operation.

Commissioner Mongeau agreed that it was a good solution and that it makes sense, but as a Clay County Commissioner she had concerns with the level of advertisement and the lack of transparency.

Mr. Dodds stated that the exchange was approved at the December 17 CCJWRD Board meeting and it is consistent with how exchanges have been handled in the past.

Commissioner Preston asked why they are being asked to act on a policy when there is a lack of information.

Mrs. Scherling indicated that the purpose of the meeting is to make a recommendation to the DA Board for approval and given the timing of acquiring the two properties, it became a priority.

Commissioner Preston stated that she is not used to making decisions based on past practices with no written document and Commissioner Campbell asked if it is within the scope of the mitigation plan.

Mr. Dodds stated that the request in front of the Land Management Committee is consistent with version 5 of the mitigation plan and it is consistent with past exchanges.  In addition, Mr. Dodds pointed out that the meeting agenda packet, included in the calendar request, contains information about the recommended land exchanges.

Mr. Campbell asked how we value the property we wish to exchange. Mr. Dodds stated that that acquisitions and exchanges are done based on the appraised price.

Mr. Breitling stated that it is almost impossible to find land adjacent to existing farmsteads, so this is the compelling reason for the land exchange.

Mr. Breitling moved to recommend the Fosse land exchange be presented to the Diversion Authority Board for approval and Mr. Olson seconded the motion. On a roll call vote, the motion carried.

Mr. Dodds gave an overview of the Krogh properties indicating that 168 acres are needed for the Diversion. There is remnant land adjacent to their land and they would receive 229 acres in exchange for the 168 acres. There will be no cash disbursement. Again, this was approved at the December 17 CCJWRD Board meeting.

Mr. Krogh commented that they have been hoping for a land exchange all along because it is their wish to keep the life estate intact. They are not happy with the exchange, but the Diversion will move forward whether or not they are satisfied.

Mrs. Scherling thanked Mr. Krogh for joining the meeting and acknowledged their sacrifice.