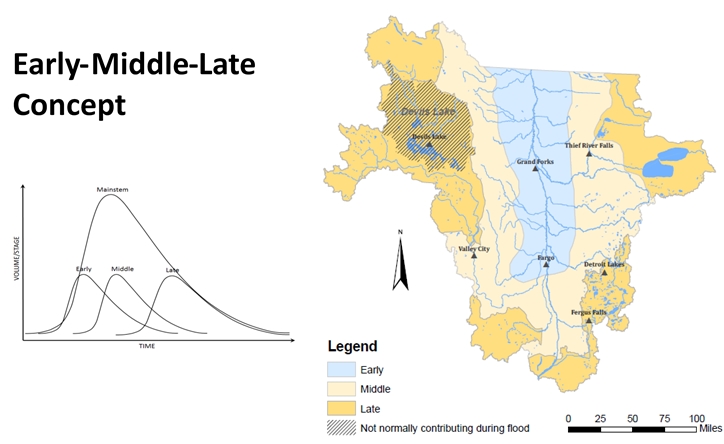 The six retention projects that have received funding from the Diversion Authority to date have been in Minnesota, three in the Bois de Sioux Watershed District and three in the Buffalo Red River Watershed District. At the January Diversion Authority meeting, Chad Engels, Engineer for the Southeast Cass Water Resource District, spoke on the progress being made on retention efforts in North Dakota.

“The important thing to realize when we’re talking about detention projects and the benefit they can provide to the FM area is the concept of Early, Middle and Late water. We are talking about the timing of the watershed, and most concerned about the peak of flood events,” said Engels.

The map (click here for a larger version) illustrates areas ahead of peak in blue, and areas in darker gold which are late water coming in behind peak. “The sweet spot is in the middle,” said Engels, referring to the areas in lighter-yellow. “Putting projects in those locations…these can help, albeit a small amount. This can time with crest in Fargo area, but of course, every flood is different.”

“The most recent of these projects was just completed this fall, the Upper Maple River Dam,” Engels said. “That, albeit, is late water, and therefore not a key project for your area. But keep in mind: all of these projects are built in someone’s backyard, and the local interest has to come first. If there are secondary benefits to the Red, that’s great. And your cost share program helps incentivize some of those projects where there is a multi-benefit to the Red mainstem and to local areas. And that is helping.”

“In terms of the things I see out there that could potentially benefit the Fargo Moorhead area…first and foremost, there’s the Antelope Creek Watershed. That’s a submittal by the Richland County Water Resource District. That particular area we do know times with Fargo-Moorhead and so whatever can come out of that location can help at the peak,” said Engels.

“With these small watershed studies that we’re talking about here, the typical site is going to be about 5,000 acre-feet, somewhere in that ballpark. Potentially in Antelope Creek, you could see maybe two-to-three sites identified,” Engels said.

The National Resources Conservation Service has initiated a program for the Red River watershed area to look at RCPP studies over the next three years, in order to identify projects that can benefit specific watersheds.

“There will be multiple projects that come from this, so we’re really starting something new. There’s cost share provided by the NRCS, and so we’re excited for it,” said Engels.