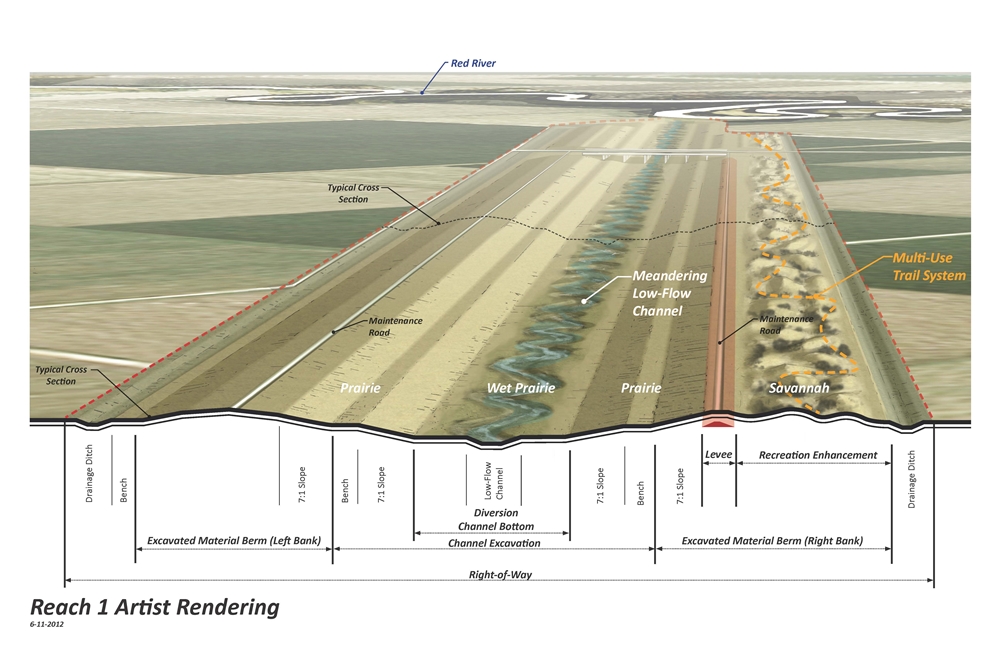 The U.S. Army Corps of Engineers has selected the FM Area Diversion Project as one of six projects nationwide that will begin construction in Fiscal Year 2016. The Corps’ Work Plan includes $5 million appropriated by Congress for the current fiscal year to get the project started. The Corps cannot use the dollars for construction until a decision, expected in July, is made by the Assistant Secretary of the Army determining that all state environmental reviews and regulatory requirements are likely to be resolved.

The North Dakota and Minnesota Congressional delegations have been working over the past several years to secure federal funding, and their help has been critical. “Today is a significant day for the entire Fargo-Moorhead community,” said Tim Mahoney, Mayor of Fargo, who specifically thanked Senators John Hoeven and Heidi Heitkamp, and Congressman Kevin Cramer, for their work. “Getting the official construction green-light from the Army Corps of Engineers is a vital milestone in advancing the FM Diversion Project.”

“Today’s announcement represents an important step for permanent flood protection in the Red River Valley,” Sen. Hoeven said. “It marks a federal commitment to move forward with construction. I also appreciate that the Corps has taken this step using P3s, which establishes a template for the way the Corps will develop and fund future water projects across the country.”

“In Fargo, a city that’s endured flood after flood, this federal funding will advance an innovative public-private partnership to build strong protections,” said Sen. Heitkamp. “Permanent protection will make sure folks don’t spend every spring praying that sandbag levees hold to protect their homes, and we need to make sure all sides in Fargo work together so we can continue to secure more funds.”

Initially, the Corps’ dollars will be used for construction on the Diversion’s inlet structure southeast of Horace, ND. “We’ve got a lot of work to do because now, the funding is there. We’ve got until the end of September 30, 2016, to use that funding,” said Darrell Vanyo, Chairman of the Diversion Authority.

The Corps of Engineers has already studied the feasibility of the Diversion Project. Getting on the Corps’ list of projects that will begin construction makes the Diversion Project eligible for funding in the future now that the “new start” provision was obtained in the 2016 Work Plan.

“This is really the start, in my mind,” said Del Rae Williams, Mayor of Moorhead. “The City of Moorhead needs a permanent flood protection project that protects work force housing, and home buying opportunities for our young home buyers.”

The mayors of cities neighboring Fargo and Moorhead also support the Diversion Project. “We still have some issues in West Fargo that we want to iron out about the Diversion, but Mayor Mahoney has reached out to me and together, I am confident that between the two of us working together, we’re going to solve all the issues,” said Rich Mattern, Mayor of West Fargo.

“The efforts put forward by the men and women who want to see permanent flood protection for the greater Fargo-Moorhead area…their efforts cannot be overstated,” said Chad Olson, Mayor of Dilworth, MN. “We can’t say enough how important it is to protect our infrastructure…our businesses, our community, our families and our kids.”

“I honestly look forward to the step when we actually put shovels in the ground, and today marks a day where we are one step closer,” said Mayor Olson.

Video is available here of the February 9 news conference announcing the selection of the Diversion Project for federal funding.